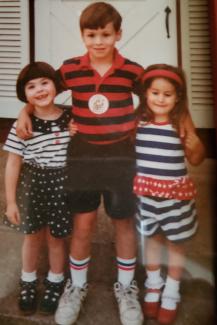 Fireworks, Fun and Fanfare for the Fourth!

Please note that our office will be closed July 4-8 in observance of the 4th of July holiday.  We will also be closing early in the afternoon on Wednesday, July 3.

I grew up in Peabody, Massachusetts, where Fourth of July picnics and parades were organized in each of the six wards that made up the city.  The parades were “Horribles Parades,” and children dressed in all manner of costumes.  Most weren’t elaborate, but we all were applauded by the community as we marched by in our homemade attire.  We were just happy to march around the streets for the reward of hot dogs, hamburgers, chips and ice cream at the end of the parade.  There were no fancy “Yeti” coolers keeping the ice cream frozen or at least cold.  The cones were usually soft and the ice cream was runny and a mess to try to eat…but it was fun!  When our daughter was younger, we brought her to several of these parades.  She loved marching with her cousins and then competing in the various races after the parade—sprints, three-legged, wheel barrow.  Simple pleasures that we all remember fondly.

While July 4th is the official day we celebrate America’s “birthday,” the actual vote for independence took place on July 2, 1776.  Several edits were made to the original document, and the final version was signed and announced on July 4, 1776.  The announcement was met with fanfare, but several more years of war were necessary to finally achieve that independence.  Our Declaration of Independence also spawned additional revolts in Europe—the French Revolution being the most notorious.

Celebrating July 4th as a special day began in 1777 in Philadelphia, and George Washington issued extra rum rations in 1778.  Three years later, Massachusetts was the first to declare an official state holiday.  In 1870, Congress voted to make July 4th a federal holiday.  While we are celebrating another bright sunny summer day of family, friends and fun, we should remember that the signers of the Declaration were taking a huge risk.  They were putting their “...fortunes and sacred honor…” at risk.  The document was essentially a statement of treason toward the British.  If captured, death was the expected result.  We certainly don’t see that level of political commitment and integrity much anymore.