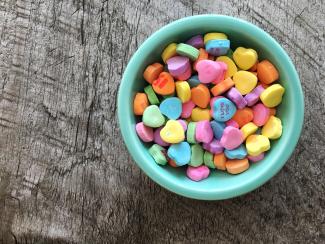 Candy and Flowers and Cards, oh my!

The less-than-romantic origins of Valentine’s Day

Valentine’s Day is here!  Candy and flowers and cards, oh my! Elementary school kids are exchanging greetings with their classmates, dropping messages to classmates in homemade Valentine mailboxes, which are often quite elaborate, probably thanks to Pinterest.

The day is named after one or more individuals named Valentine who were executed in fourth century Rome.  Not such a great start for a holiday that has come to symbolize love!  Unfortunately, it gets worse.

It’s a little convoluted as to how the day came to honor a Christian Saint, but romance and love seem to have had very little to do with it.

The modern holiday was loosely derived from an ancient Roman celebration of Lupercalia.  History buffs may guess that the risqué rituals the Romans indulged in were eventually denounced by Pope Gelasius in 496 A.D. in mid-February.  As was often the case, the Christian Church commandeered the holiday and turned it into a Christian holy day by linking the executed Valentines to Lupercalia and then convincing people that this was a better way to celebrate the day!

The Normans likely helped shape our modern version of Valentine’s Day, as they celebrated Galatin’s Day.  Galatin meant “lover of women,” and so it was likely confused with St. Valentine’s Day at some point because they sound alike.

According to NPR, “…as the years went on, the holiday grew sweeter.  Chaucer and Shakespeare romanticized it in their work, and it gained popularity throughout Britain and the rest of Europe.  Handmade paper cards became the tokens-du-jour in the Middle Ages.  Eventually, the tradition made its way to the New World.  The industrial revolution ushered in factory-made cards in the 19th century.  And in 1913, Hallmark Cards of Kansas City, Missouri, began mass producing valentines.  February has not been the same since.”

No matter how tame our celebrations are compared to those in ancient Rome, you don’t want to miss the opportunity to store up some good will with your sweetheart and send some love to those you love on Valentine’s Day.