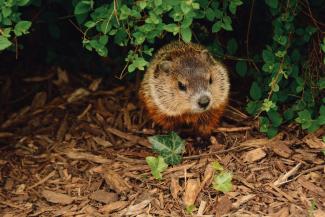 Are you seeing the shadows of last year in 2019?

The Groundhog and Promises of Spring

Groundhog Day is always celebrated on February 2.  I don’t know why, but one reason is that the date is the mid-point between the Winter Solstice (December 21) and the Spring Equinox (March 21).

Naturally, the day grew out of celebrations/ceremonies from the ancients in Northern Europe.  It was celebrated by the Celts because it was Winter, and they needed something to do. It was called “Imbloc” – lamb’s milk – because the lambing season had just begun.  It was also call “Brigantia” for the Celtic female deity of light…spring was coming!  Good excuse to break up the cabin fever that was probably setting in!

The Christian church, in its habit of co-opting the native/pagan holy days, called the day “Candlemas.”   The church used the day to celebrate the presenting of Jesus to the Temple in Jerusalem.  The term "Candlemas" (meaning Candle Mass) refers to the practice of the blessing of candles by the priest during a church service ("mass") for use during the year in church and in the homes of the faithful.

Europeans “announced” the coming of Spring with different animals.  A bear brought the news to people in France and England, and a badger to the people of Germany.  When large groups of Germans settled in Pennsylvania, they substituted the groundhog for the badger.  Punxsutawney Phil eventually become the predictor of the coming of Spring for us all.  The day was also used as a predictor of when the first plantings might occur…soon if it was dark and cloudy because the weather was rainy, and thus the ground would be ready sooner, or later if it were bright and sunny because the snow and frost of winter would linger on.

Punxsutawney Phil’s prediction rate is about 40%.  Don’t place any bets on his forecast!

The year is still young enough that you can take significant steps to help manage your income and taxes for 2019.  Don’t let this year become another year just like the last one.  You don’t want to be reliving your own personal version of Bill Murray’s “Groundhog Day” movie!